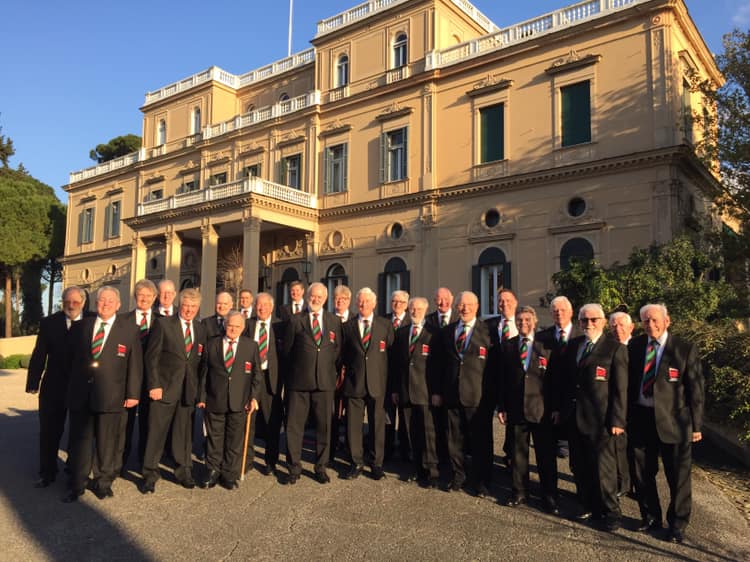 It is over 15 years ago that The London Welsh Rugby Club Choir was conceived and embarked on their tour of New Zealand to promote the club and to support the 2005 British and Irish Lions.

It was after the final game of the 2002/03 season when London Welsh had just played Bedford Blues that the idea of forming The London Welsh Rugby Club Choir was mooted. Four members of the club, Jack Lowis, Keith Roberts, Dewi Thomas and Robert "Joe" Jones, all members of the London Welsh Male Voice Choir, were wondering what was the best way of getting to New Zealand for the 2005 British and Irish Lions Tour. Initially, the four of them were going to make the journey, stand in a bar or on a street corner, start to sing and see what happened next. Then word got around what they were planning and eventually we had a choir of 44 and a total tour party of 72 who wanted to be part of the adventure and so the London Welsh Rugby Club Choir was formed.

They decided at the outset that they would perform free of charge as long as all profits went to local charities and this paid spectacular dividends in the incredible hospitality that was shown to us by the rugby-mad people of New Zealand and we made the wise move of asking John Dawes to be President of the choir and to accompany the choir to New Zealand.

Starting a choir of this magnitude from scratch needed quite a bit of organisation and funds were required to buy such things as music and insurance. Uniforms were sourced from one of the choir members who worked for the All-English Tennis Club at Wimbledon and we used the company who supplied all of their clothing for our jackets, shirts and trousers. Choristers paid for their own uniforms, accommodation and travel. The ties were paid for by London Welsh Rugby Club Chairman. We managed to raise funds by doing a few small cabarets, weddings and funerals, the first being a wedding at St Paul's Cathedral in London.

We had no idea how much the name John Dawes and London Welsh Rugby Club was revered in New Zealand, mostly due to the achievements of the winning 1971 Lions. We were then contacted by a very well-known and respected New Zealand journalist, Dianne Howarth from Rugby News, who was writing the history of the All Blacks and she asked if she could help to organise the tour so, instead of standing in the corner of a bar and start singing, we suddenly found ourselves performing to sell-out audiences in some of the best concert venues in the southern hemisphere such as Christchurch Town Hall, Wellington Cathedral, The Te Papa Museum - organised by The British High Commission, Ellesley Race Course, an informal sing-song in Rotorua and two performances in the Northern Club in Auckland where the producer of Top of the Pops heard us and immediately invited us onto the show the next day (we performed Sloop John B and Men of Harlech)!! We were also treated to a proper Haka by the boys from Wellington School when we sang at their morning assembly!

On return to the UK, we decided that we had such a good thing going that we would continue with the choir and promote the good name of London Welsh Rugby Club through music and friendship. Offers of concerts and cabarets came and we had the honour of representing Wales at an international trade fair in Spain, a request to sing at a memorial service for fallen Welsh soldiers in Holland and an invite to sing in the French Alps, the Prime Minister's Residence in Valletta, Malta and most recently the British Ambassador's residence in Rome.

The media got to know of us and we were asked by the Chris Evans Breakfast Show to sing live for them four times, and recently we have been on Saturday Kitchen Live twice But our biggest breakthrough was in November 2011 when I had received a call from the organisers of the 2012 London Olympics to ask if the choir would audition for the closing ceremony at the Olympic Stadium. We did the audition at London Welsh Rugby Club on the eve of the England Wales game in 2012 and were told immediately that we had been chosen. The rest is history. From then on we have received invites to sing at the final of the Hong Kong Sevens, to perform at the Rugby World Cup in 2015, many TV and radio appearances and to sing for Prince Charles's 70th birthday at the London Palladium. But rugby is in our blood and you will often see and hear us at London Welsh Rugby Club during the rugby season. If you find yourselves there, please come and talk to us.

Sign up for our newsletter to receive the latest news and event postings.